HandyControl is a WPF control library that rewrites almost all native styles and includes more than 80 custom controls (increasingly).

The difference between official and unofficial versions

In the unofficial version you will enjoy the following features:

Github is generally updated every day and is relatively unsuitable for production.

After cloning the source code from Github, go to the src folder. The folder structure is as follows: 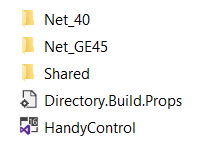 Net_GE45 means that the .Net version is greater than or equal to 4.5.

The Shared folder is used to store the code of the shared project.

The five folders in the figure each contain two subfolders, for example, two shared subfolders in Shared:

We use HandyControl.sln as an example to illustrate, use VS2019 to open the solution: 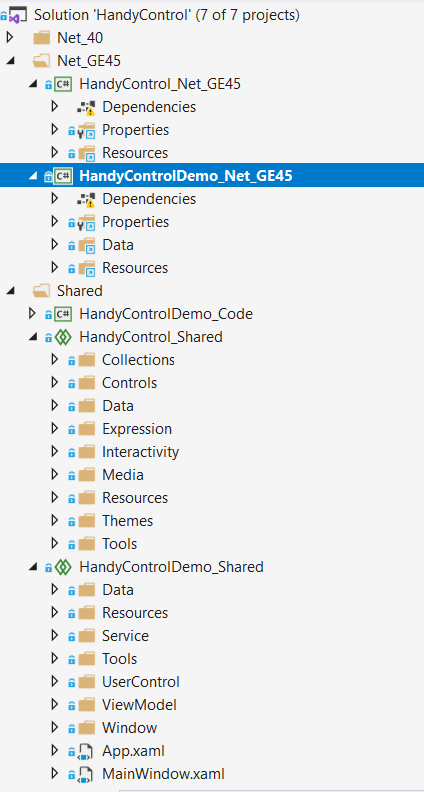 If you want to start the example and see the effect of the control, please use HandyControlDemo_[specified item type] as the startup item.

As shown in the figure, HandyControlDemo_Net_GE45 has been used as the startup item.

Most of the public source code is in the Shared folder, and some of the code that needs to be customized for a particular project type is proposed to be placed in its own folder.

The HandyControl source code (mainly in HandyControl_Shared) mainly contains 7 folders, and their descriptions are as follows:

Each control in Controls can generally find the corresponding xaml definition in Themes.

Please confirm that your development environment meets the requirements before compiling.

Open HandyControl.sln and select the specified environment to compile in the Solution Configuration drop-down box:

Go to Build folder and open Powershell here, then execute this command